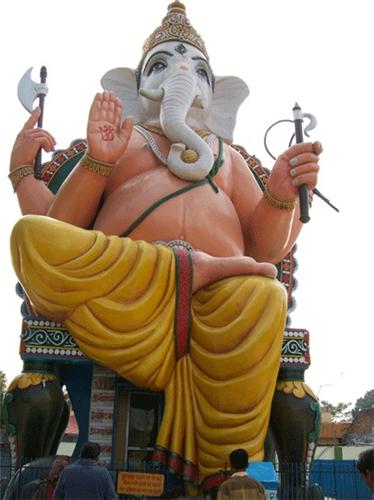 The city of Muzaffarnagar is popular for a number of temples and spots of religious interest. The city has its roots to ancient India, which goes back to Harappan Civilization. As per the religious experts, the village called Pachenda found in Muzaffarnagar district is the same place where the great epic war of Mahabharata was fought. Hence its connectivity with different religions and cultures is very much inevitable. Having strategically located at NH 58, it is very well connected with different cities and towns including the national Capital. This gives more reasons to the people of religious bent of mind to visit a number of sacred places found in Muzaffarnagar.

The below is the list of religious spots, which are worth visiting in Muzaffarnagar.

It is a small and popular town of religious interest, which falls in the district of Muzaffarnagar. It is located at around 30 kms away from the city. It is especially known for the 5100-year-old Banyan tree commonly known as Vat Vriksha. This tree is considered as an important place of reverence and is being worshiped by millions of Hindus coming here from all across the country. Besides, in this holy town you can find a number of other religious temples and statues particularly the sky high statues of Ganesha, Shiva, Durga and Hanuman. Having a huge array of religious spots and the presence of holy river Ganga in Shukratal, people also call this place as a "Mini Haridwar". Every year thousands of pilgrims from across the country and abroad are seen visiting Shukratal.

The other important temple worth visiting in Muzaffarnagar is Bhairo ka Mandir. This temple is dedicated to Lord Bhairo (an important deity of Hindus). It is very much popular for encompassing Ekadash Shivlinga, which is a spot wherein a collection of 11 different Shivlingas are present. Being located in a peaceful place, it is visited by thousands with religious bent of mind and devotes who find the spirituality and peace of mind by enjoying some beautiful chants (aarti) in the evening time.

It is a sacred temple for Hindus, which was built in 1979 by one of the leading businessman and religious devotee called Giani Ram Gupta. Sankirtan Bhawan is primarily a temple devoted to Lord Tirupati Balaji (another form of Lord Vishnu). One of the striking features of this place is the Bhandaara. This is organized in the food area every afternoon sharp at 12.00 on a daily basis. Another noteworthy feature of this place is the daily kirtan, sung every evening by the chief pujari of Sankirtan Bhawan. Due to this, Sankirtan Bhawan has another name - Kirtan Bhawan (place of religious songs). It located in New Mandi area in Muzaffarnagar.

It is one of the sacred sites of Jain community, which is located in a small village called Vahelna 4 kilometers away from the town area of Muzaffarnagar. One of the most striking features of this temple is that there is a common wall in between this temple and a mosque beside it. This showcases one of the best examples for Hindu-Muslim brotherhood in the city and it exemplifies the real secular fabric of the country.

This is one of the oldest temples of Hindus, which is located over the western sides of Muzaffarnagar. Being one of the ancient temples, the Kali Nadi Devi Mandir has great mythological significance. During the festive times especially at the time of Holi festival and on the Devi Chudas, a grand Bhandara (religious congregation) and fair is organized with all fervor and enthusiasm. The Kali Nadi Devi Mandir also has a few other religious spots close to it, which includes a temple dedicated to Dallu Devta.

It is an important place of worship, which is found in the heart of Muzaffarnagar city. It is based over the famous GT road in an area called Sutharshahi, which remains accessible from all the sides of Muzaffarnagar. Every year more than three lakh of kawariyas (religious devotees) carry out the Parikrama (encirclement) of this holy temple during the festive time of Shivratri. During these days, the scene over Shiv Chowk becomes very much incredible to catch.

It is basically a temple, which is one of the important branches of Har Shrinath Trust. This trust has its head office based in New Delhi. The trust runs a number of branches (temples) in India and abroad, with Dargah Har Shrinath an important branch temple based at Ansari road in Muzaffarnagar. It is a popular place for religious devotees to visit from different religious communities all across India especially during the festive times to worship at this special temple. The festival of Shivratri is considered as an important festival for Hindu community, which is celebrated with great charm and spirit. During the Shivratri days, a grand function is organized by temple trust wherein devotees are seen worshiping with great fervor and enthusiasm. Dargah Har Shrinath observes its annual function on 9th of March with grand splendour and vigour.

This is also called as Jama Masjid, which is one of the oldest and popular mosques based in Muzaffarnagar. It is located in an area called Khudda at Nadeemgada based in the hearts of the city. During festive times of Eid, this mosque witnesses a grand gathering of Muslims at the time of two Eid prayers and the auspicious months of Ramzan.

Sikh constitute in a small percentage in Muzaffarnagar still they are a few gurudwaras in this city. One of the popular ones includes the Panchayati Gurudwara, which is located at Gandhi Colony in the heart of a residential area of the city. During the festive time, you can find lots of rush at this Gurudwara.