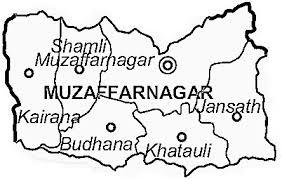 Located in the northern part of Uttar Pradesh, Muzaffarnagar is an integral part of the Saharanpur division. Muzaffarnagar is the municipal board or the headquarters of Muzaffarnagar district. The essence of the city is the combination of religious venues that attracts various tourists across the year and industrial growth in the area for which the district is termed as “The Sugar Bowl of India”. One of the richest districts in terms of possessing excellent farming lands this place is also termed as Laxmi Nagar. As per Forbes Magazine, Feb 2012 edition, Muzaffarnagar has the highest per capita income in the whole state. Passing through National Highway -58, this district has well connectivity through roads and even railway network.

As per the exact location of the district, Muzaffarnagar falls at Longitude 77.6 and Latitude 29.4. The boundaries of Muzaffarnagar district is provided by Saharanpur and Haridwar district in the North while in the south there are Meerut and Bagpat districts. The eastern part is bordered by Bijnor district whereas the western part is enclosed by Panipat and Karnal district. Situated in the doab region of River Ganges and River Yamuna, the district is rectangular in shape and the greatest length if measured from the extreme eastern point to extreme west is sixty one miles and the distance from extreme north to south is thirty six miles. As per the last calculation in the year 2000, the total covered by Muzaffarnagar district is 4049 sqkm. The neighboring states of the district are Haryana on the western part and Uttarakhand on the eastern part. The elevation range of the district falls under 251 to 236 meters.

As per the 2011 census , the population of Muzaffarnagar stands at 4,143,512 of which the male inhabitants are 2,193,434 and female populace stands at 1,950,078. As per the records the population of Muzaffarnagar is constantly at an increase. The present census records a 16.94 percent increase in population in compared to the census of 2001 which again showed a 24.65 percent increase in comparison to 1991 census of India. This resulted into a much higher density in the district with 1034 inhabitants per sq km. The sex ratio in Muzaffarnagar district is 889 female per 1000 male population. The total population under 6yrs of age is 646,062 of which male child are 346,805 and female child 299,257. The population under 6 yrs has changed to 15.59 percent in 2011 census in compared to 19.13 percent in 2001 census. The majority of the population however belongs from the Jat community in this district.

The official and preferred language of the major population in Muzaffarnagar is Hindi. However, with the onset of industrial growth and economical progress, in few places people use the English language to communicate. Another language which is often used in this part is the Urdu language.

Sub-tropical climate prevails over the district of Muzaffarnagar. The month from March to June experiences the season of summer where the temperature shuffles between 300C to 430C maximum. This time of the year is usually hot and not a very good time to visit the district for tourism as sightseeing in such humid weather can be really hectic. July to September is the months of monsoon season which records sufficient rainfall in the district. The next season that follows the monsoon is the winter season which is ideally the best time to visit the district. The months from October to March is the cold weather season where the temperature shuffles between 50C to 250C and the weather remains ideal for sightseeing and other activities.

Muzaffarnagar is the proud owner of one of the most fertile lands in the whole country. Farming of several crops are done in this part of the country which includes sugarcane, paddy, maize, moong, urad, groundnut, cotton, arhar, sorghum, bajra, til, barley, wheat, gram, pea, lentil, potato, mustard and alsi. The economy of the district is majorly based on the agricultural lands and the farming on this fertile soil.


Rivers and Water Sources in Muzaffarnagar

Apart from the Ganga and Yamuna rivers, major rivers which adorn the district are Kirsani River, Hindan River, Eastern Kali Nadi and Banganga River. These rivers not only support the water requirement of the district through various irrigation and land farming projects, it also supports the fishery business in the district. Huge revenue is earned from this mode of earning and it supports many families in the district as this is the major profession for their living.